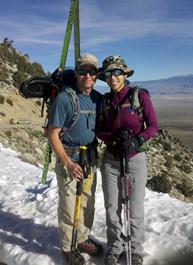 He has worked seasonally for the National Park Service, the Yosemite Search and Rescue for six years. As well worked for the Yosemite Mountaineering School for two seasons. His peak climb was at Smith Rocks  5.14a known as “To Bolt or Not to Be.”

Shawn has climbed almost all of the 14,000 ft. peaks in the United States and many locations around the world.  In addition has been  part of the logistics team at Mt. Everest’s base camp in 1987. Shawn has been a teacher, paramedic, mountain guide for the American Mountain Guides Association (AMGA), and an instructor for both Outward Bound and NOLS (National Outdoors Leadership School).

He is currently the owner of the Orange County Challenge Course and Rock City Climbing Center located in Southern California. He enjoys teaching, conducting programs for Scouts, and leading private groups on a variety of outdoor adventures.